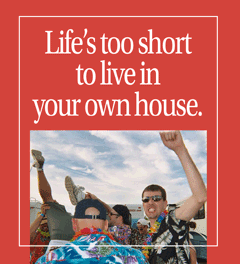 This work is licensed under a
Creative Commons
Attribution-ShareAlike 3.0
Unported License.

“Life’s too short to clean your own house,” was the headline on the brochure I got in the mail. In the parody you see to the left, I took this idea to the logical next step.

You see, there is a grain of truth in the original advertisement. If you can’t clean your house, it isn’t because cleaning is such hard work. It’s because you don’t have time. What this really means is that you’re not spending much time in the rooms of your house. Maybe you’re there, but you’re not really there — you’re on the phone, watching TV, checking on what your friends are doing online, or whatever, but too busy to really experience the room you’re in.

It makes sense that you might not want the burden of cleaning rooms that you’re not really using. But it may make just as much sense not to have those rooms if you rarely have time to use them. That is, not having a house might make your life easier. This helps to explain why it is suddenly such a big trend for people to sell their houses and move to much smaller places. It takes an enormous amount of time to pay for and take care of a house, and if you can save three or four hours a day by not having a house, it is certainly something to consider. (For more on this trend and its economic consequences, see my other blog, The Shamanic Economist.)

But that’s not the only possible answer. If you’re not using a room in your house, or barely using it, then the room is essentially a warehouse, a store room that happens to be part of your house. Rooms are basically all the same empty, so if you aren’t using a room, it has to be because of the things that are in it. It makes sense, then, to go into the room and look at it as a warehouse. Ask yourself: “What are these things that we’re storing here? What’s the story behind how these things got to be here? Does the story make sense? If we aren’t using them, does it really make sense to have them? What else could we do with the things? What else could we do with the space?”

Often I’ve talked to people who are convinced they’ve outgrown their house and need to move to a bigger place. When I ask how they’re using the rooms they have now, though, it usually turns out that they’re only using half of them regularly. For every room, there is a story about how it is used, but the quality of the story doesn’t tell you much. You have to ask, how many hours per year does that story really happen? Some rooms are used for their intended purpose only about 20 or 30 hours per year — and that’s not really often enough to make the room necessary.

In the end, it’s always about the stuff. What stuff do you use in the story you have about the room, but not in real life? What stuff can you take away, so that you can use the room again? Or can you take away everything in the room? That‘s probably the case if no one has looked at the stuff in the room for more than a year, but don’t just assume that — evaluate the stuff and ask what its real value is. If the stuff is really no longer part of your life, don’t be afraid to empty out the room and leave it empty until you figure out what you can use it for.

Then again, sometimes not having a house is the right answer, at least temporarily or during transitional periods. The Four-Hour Workweek suggests strategies for renting out your house for periods of time while you go do other things. Not having a house makes it easy to go out more — visit friends, go to concerts, eat in restaurants, travel. This is a subject I’ll write more about in a future post. Of course, to live in a little apartment or a room in someone else’s house, or to keep your things in storage while you travel, you have to scale back your possessions. Having no more possessions than you can actually use will help to relieve the pressure on your time, regardless of what you eventually decide about your house.