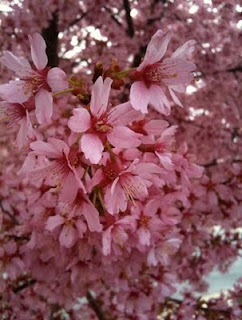 There is no surer sign of spring than a cherry tree in bloom. Cherry blossoms are a tradition here in Pennsylvania, where I took this photo a few days ago. Pennsylvania’s flowering cherry trees originated in Japan, where the cherry blossom tradition goes back at least 1,700 years.

This week in Japan, the blossoms have probably extended as far north as Fukushima. The arrival of spring there this year is a bittersweet and surreal moment. For the first time in the city’s history, no one can see the cherry blossoms. No one is doing any spring cleaning. No one is there at all. The city had to be evacuated because of the unfolding nuclear disaster at the Fukushima Daiichi power plant, and residents heard over the weekend that they may not be returning home until next year.

The situation at Fukushima Daiichi was triggered by an earthquake and the resulting tsunami and power outage, but it became a disaster because of clutter. A series of releases of radiation has forced workers to evacuate the plant for hours at a time. Each evacuation of a few hours is a setback of a few days in the work needed to get the reactors under control again. The dangerous radiation came from nuclear waste stored in the top levels of the same buildings — the junk in the attic, if you will. These were pools of water filled with all the spent nuclear fuel from the reactor’s 50-year history, filled beyond their designed capacity, according to engineers. No one gave the nuclear waste pools much thought until the power went out, the water started to evaporate, and the nuclear waste heated up and became volatile and dangerous.

Spent nuclear fuel has to be stored on site in a pool for an initial few years of cooling off, but then, ideally, it should be taken away and stored somewhere away from danger. In other words, a nuclear power plant has to clean out its attic sometimes too. But that apparently was never done at Fukushima Daiichi, nor indeed at most of the world’s nuclear power stations. Spring cleaning at Fukushima Daiichi, which may actually extend into the summer and fall, will include an effort to remove the spent nuclear fuel so that its radiation will no longer threaten the city, the world, and the workers struggling to get the reactors under control.

I am sure this episode will prompt a new look at security policies for spent nuclear fuel worldwide. But, of course, the nuclear power industry is not the only place where potentially harmful things are stored away and forgotten. The story there might prompt you to take a look in your own attic. There is no spent nuclear fuel there, I trust, but you might find things that no longer serve any useful purpose and could potentially do harm, or might add to the damage in a disaster or other upheaval.

Look for the obvious risky materials: pesticides and other poisons, aging lead-acid batteries and other heavy metals, solvents and other flammable liquids. But also consider smaller and less obvious risks: journals that you wouldn’t want people to read, costumes or furnishings that are no longer consistent with your personal style, glass items that might shatter eventually from the heating and cooling that happens in an attic, or from an earthquake. Most of all, look for things that, realistically, you are never going to use again. Those aren’t really worth keeping around even if they don’t seem to present any significant risk. Risks are evaluated by weighing them against the likely reward, so when there is no reward, even a tiny risk is not justified.

You can’t really prepare for a disaster, but you can reduce your risks, and one of the simplest ways you can do so is by taking unneeded and potentially harmful things away.