Avoiding the Subject of Clutter

The question “Can’t we talk about something more pleasant?” forms the title of a new book by Roz Chast. I haven’t seen the book myself, but I am told that the title refers to the touchy question Roz asked her aging parents about what would happen to all of their stuff when they were no longer around to watch over it. It was a subject they ultimately never could bring themselves to address. 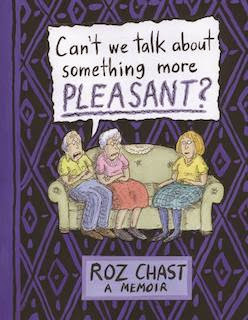 That’s a common story, of course, and not just among those of us who are getting old. Most people living a middle-class lifestyle have several times more possessions than they can realistically ever use. Most of it, logically, is clutter, and should be taken away in way or another. Unfortunately, it is easier to postpone the question of which part is actually excess. It’s a subject that can wait until after we are done with whatever we are in the middle of this week, and in practice, that means it can wait indefinitely, or at least until the next time we move.

Clutter is an unpleasant topic in more ways than one. It can be unpleasant in itself, with dust, bugs, mold, and mice. It can also imply unflattering things about its owner. “I don’t seem to be doing the things I said I would be doing,” you will have to think to yourself as you survey your unused possessions. If you are realistic about it you might even think, “I might die before I get around to _______” (filling in the blank with whatever the nominal purpose of that particular possession is). It‘s no wonder if a subject that brings up a thought that begins with “I might die” is one that people would like to avoid.

It’s no accident that clutter and death are subjects that go together. Clutter, for all its faults such as getting in the way, is a symbol of what you hope your life will be. Facing clutter involves recognizing that the scope of your life’s actions has limits, so that you have to decide to do some things and not do others.

If you can make those decisions, decluttering is as simple as focusing on what you want most and letting the other things go. It can be a powerful process that gives shape to your life and your efforts. If you are not quite ready to make decisions like that, decluttering is an unpleasant topic and a process that can wear you out quickly. Of course, most of us, most of the time, are in that latter category, recognizing that we have too many things, but hoping it is a subject that we can put off until another day.