While my own experiment with minimalism in shopping continues, the affluent side of America is experimenting with a different approach to minimizing shopping.

Alana Semuels writes in The Atlantic, “‘We Are All Accumulating Mountains of Things’” because of the ease of online shopping. The article cites statistics and trends that may be familiar to most readers: spending is going up on items like clothing and shoes; houses and storage lockers are getting larger to accommodate the mountains of possessions. Nevertheless, the scale of the flow of stuff is alarming. For example, “The average American bought 7.4 pairs of shoes last year, up from 6.6 pairs in 2000.” It isn’t possible for a moderately active person to use up 4 pairs of shoes in a year, so we are collectively buying at least twice as many shoes as we can use.

Americans are buying too many things, more than ever, and it is not just because online shopping has become relatively effortless. The time-saving nature of online shopping is important to note, though. People are trying to put less time and attention into shopping, and that is a big part of the recent expansion in online shopping.

There are problems in the lack of attention and the short time span of shopping decisions, of course. Shoppers are manipulated into buying things they won’t use, not noticing the element of fantasy behind the purchasing decisions until the money has already been spent. Dealing with stuff after it arrives at home is another level of cost, greater than the actual purchase price.

In my own life this summer, my emphasis on small home improvement projects has limited my store visits and spending. It is hard to spend a fortune on paint and hardware when applying $30 of paint takes a couple of days of one’s own labor. My biggest and most expensive project this summer was painting the hallway with white dry erase board on one side and black chalkboard on the other side. You see a hint of the effort in the photo, taken before I removed the tarps and masking tape from the floor. This project cost close to $100 but after hours of painting over a three-day period, I wasn’t in a hurry to go back to the store to buy another project on the same scale. 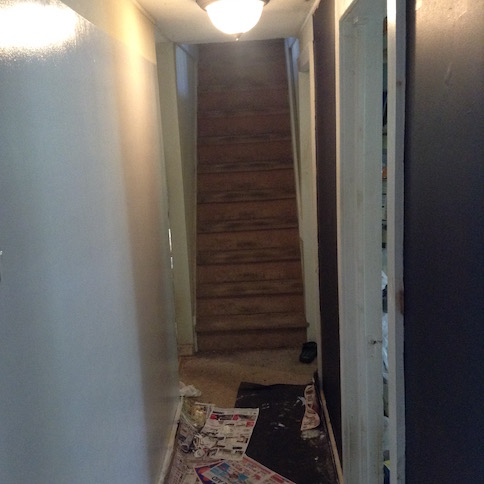 I cut back further on food and clothing purchases. My reticence on spending did not quite carry over to online purchases, though. Yesterday I went online to order a music CD, a Falco album that was conspicuously missing from my collection. After listening to “Zuviel Hitze” almost every night for two weeks on YouTube, I was starting to feel self-conscious about listening to a song so many times but not paying for it. It was past time to add the album to my collection. While I was at it, though, I ordered four other music CDs, from Falco, Todd Rundgren, and The Fixx. It was, just as they say, easy to do.

There are at least two economic fallacies in buying a lot of stuff online and keeping it around the house. First, if stuff is this easy and cheap to buy, there is no incentive to keep extra stuff around. Second, if so many people are buying stuff they can’t use, that stuff has to be somewhere.

I’ll start with the example of buying socks for later. If you buy socks in a store, you probably don’t want to wait until the sock drawer is actually empty before buying more. You might be wearing your last clean pair of socks to the store to buy more socks, but what if you had something else to do that day? It could disrupt your plans for that day. But it is different if you buy socks online. Why not wait until the sock drawer is actually empty? You can place your order that minute, and the socks will arrive in two or three days. It’s not likely that socks will cost more that day than they cost today, and just as likely that they cost less if you wait. In the worst case, you wash a few socks by hand until the new socks arrive — still not much of an inconvenience. So the case for stocking up on socks, or anything, is hard to make.

And what happens to the excess stuff people buy in their shopping binges, whether in-store or online? A fraction of it ends up for sale on sites like Letgo or Mercari, either still new or worn just once. These items are at a much lower price, often around 1/4 of the original discounted retail price. Another fraction is donated to thrift shops like Goodwill. Go to a thrift shop and you can buy new or nearly new clothing for around $5. It is not as convenient as tapping a touch-screen, but when you compare prices, the trip might be worth it. Of course, most of the excess purchases clutter up people’s houses, getting in the way as they try to live their lives, or they are stored as tremendous expense in self-storage facilities, or they fall into the trash and take up valuable space in a landfill. None of these are good outcomes for the impulse shopper. Many of the purchases we make are simply mistakes.

My own house was not generous in size when it was built a lifetime ago, and by today’s standards it is downright small. You might call it a cottage. Adding to the challenge of living here, the house was built without closets, aside from an indentation in one corner of the office where I sit as I write this. The 8 square foot closet seems to have occurred as an accident of the floor plan. This summer as I have spent more time improving my house than bringing new stuff home, it has become more obvious to me that I have too much stuff in the house — more than I can use and more than I have room for if I want to live well. I’ve been spending some time cutting back on what I have.

This morning, reflecting on my purchase of five more music CDs the night before, I decided it was time to thin my music collection again. I pulled out a stack of 9 CDs to give away. Over the course of the morning, that stack has grown to 26 CDs to give away or sell and a similar number to review to decide whether I want to keep them.

Then I went through my socks, determined to cut back in that category. I have had plenty of socks for as long as I can remember. Some, I am embarrassed to say, are what is left from a binge of discount sock-buying around 1989. Today I picked out 10–12 well-worn pairs of socks to throw away. Some had holes that I had managed not to notice until today. I counted the socks I had left. There were 31 pairs of socks I am actually wearing, plus the pair I am wearing today and a few more in the laundry — so perhaps 35. That is still too many but no longer ridiculous. But wait, there are more: 12 pairs that I pulled out and stored in a box last year because they were duplicates of colors; 9 new pairs in original retail packaging; and I think 8 more, also new, that I can’t find today, but I know they are around here somewhere. That’s 64 pairs of socks. At least I know I don’t need to buy any more socks until 2026 — except that I probably will, when the last green, tan, and blue socks wear out and I decide I can’t do without those colors.

Since I went through my socks, I should provide an update on my shoes. Earlier this year I noted that I had too many shoes, especially running shoes nearing the end of their useful lives. The old running shoes have fallen by the wayside one pair at a time since April. There is one more pair that I should throw away, but I am hoping to keep it going through the end of the lawn-mowing season, and I will throw it away then. I now have just enough running shoes, but I still have plenty of walking shoes. I will have to change my habits to wear walking shoes more often when I am not actually running. This year proves that I can still wear out shoes.

The idea of not needing to keep much extra applies when it comes to guitars, which I was looking at last night. Though I play guitar all the time, I concluded that I should ideally have five guitars: two solid-body guitars, one acoustic guitar, and two bass guitars. If I had a larger house, perhaps I might have a few more, or maybe not. I am not a guitar collector, and in my experience, a guitar breaks only about once every ten or twenty years. When that happens, this is a world in which a replacement can be obtained at the tap of a finger with a delay of no more than a few days. I feel more secure having a second guitar in the house I can go to, but there is no plausible scenario in which I will need a third guitar of the same kind. As it happens, I have ten guitars, so I should be selling half of them.

Alas, these days selling is not nearly so simple as buying. It could take the rest of the year to find buyers for five guitars, along with the dozens of other unwanted things in the house that are worth something in a commercial sense. But I need the space. And it takes work to keep a guitar. Ideally, I should spend an hour every year cleaning and adjusting each guitar I own, whether I have played it that year or not. For me, that is reason enough to own only the guitars I will actually play.

Taking a new look at my guitar collection is the kind of adjustment you would logically expect as a person spends less time shopping and more time around the things they have bought previously. I might hope to spend more time using my possessions, but it cuts the other way too — there are things I will never use, and I finally have time to notice that and adjust accordingly.