March of Trash asks you to take action on clutter every day for a month.

The mere fact that the plastic groccery bag dispenser is filled to overflowing is a sign that something is out of balance. 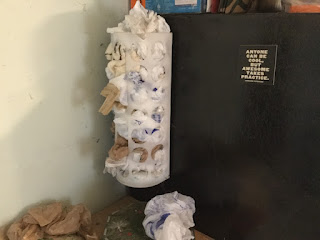 It’s a good idea — save plastic grocery bags out of the way in order to reuse them later. So what went wrong?

I got this plastic grocery bag dispenser, the one you see in the photographs, about six years ago. It is attached to the side of the refrigerator. After I got it, I quickly filled it with plastic grocery bags. The fact that I filled it at all tells you that, on average, I collect bags faster than I can use them. In fact, I have used a bag from the dispenser only about five times in six years. That’s because I always seem to have other plastic grocery bags lying around.

The same thing can happen with any supply that you save for reuse. Paper clips and rubber bands are the classic examples, but I have seen the same effect with scratch paper, envelopes, packing peanuts, air pillows, cardboard boxes, pens, newspapers, and other supplies.

The right answer in general for this situation, when a supply is piling up without any effort and this pattern will continue for the foreseeable future, is to keep only enough for a short time. Maybe you can give away the rest, but if not, you can discard them.

In an ideal world, these plastic grocery bags could be recycled. In practice, in my country, plastic manufacturers cannot keep up with the supply of scrap plastic available for recycling. The current state of plastic flows is that most of the polyethylene terephthalate and polypropylene beverage containers are recycled, and the remaining scrap plastic is incinerated or buried in a landfill.

My guess is that the dispenser, as seen in the first photo, is filled with about 200 bags, all more than five years old. The older bags might not be quite as strong as newer bags because of the effect of time on the plastic film. 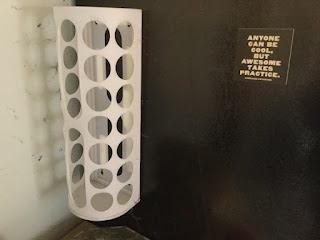 My first step, then, is to empty the dispenser completely, discarding the older bags it contains. Then I can place a small number of bags, enough for a month or two, into the dispenser. I can discard any others that happen to be around. 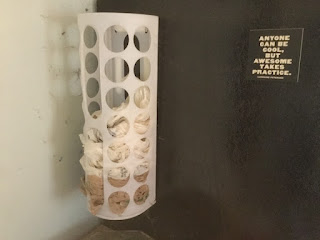 The final picture shows the dispenser with 15 bags. The dispenser might look half full, but don’t be fooled; the bags are placed in more loosely, and the number is a tenth of what was there before.

Fifteen bags might not seem like enough, but I will get more. Anytime the dispenser looks almost full, I can feel free to throw bags away as they come in. I now know there is no need to take any effort to squeeze more bags in.

I can look to see if I have more opportunities to use bags of this kind, now that I know that I get them in an effectively unlimited supply. I can look for opportunities to obtain fewer bags, but that is mostly not for me to say. The number of bags coming in is determined by the policies of the stores I shop at. I am not the type of person to prod an institution the size of a retail store to change.

Logically, you might say that it shouldn’t matter if the dispenser is filled to the top with bags that I can’t use — it doesn’t change the size of the container. In practice, it does matter. Try taking away some of the excess supplies that you won’t realistically be able to use. Even when it doesn’t save space, you’ll find that it feels better to have the flow of materials in a state that is closer to a balance. Having excess stuff can feel like a burden. Having about the right amount of stuff makes life feel easy.