The month is not quite half over and already I am starting to see completed March of Trash scorecards. I should hasten to add that no one is checking your scorecard to make sure you really completed it, but on the other hand, I’m always happy to see what people have accomplished. A March of Trash scorecard can be a head-scratcher to read at times, though. People are getting rid of things I never heard of. 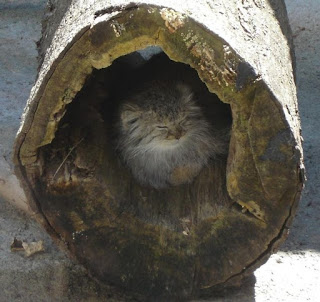 For example, what is a “cat cave”? Wikipedia (describing the Columbus Zoo) offers the image at right. At Etsy it seems that cat caves are often made from felt. Whatever the details, a cat cave is apparently a bulky item that, if sitting idle, calls out to be given away to a household where a cat lives.

For every item there is a story, but the story doesn’t fit on the two-inch line that the March of Trash scorecard provides. The front-end loader that one participant sold (or gave away) might have helped build a barn or clean up flood debris. Whatever the story, if its work is all done, there is nothing gained by letting a valuable piece of equipment sit around and turn to rust. Almost any large-scale project will leave you with equipment you don’t need anymore. It might not be the most glamorous part of the work, but eventually you have to look at the stuff left behind and ask, “Where does it all belong now?”

There is a reason the scorecard has three columns. Almost everyone seems seems to find that one column is harder to fill up than the others. Perhaps depression-era thinking about the value of things makes it hard to throw things away. Perhaps it’s hard to put things away because you don’t know where they should go. In my case, it’s a challenge to find stuff that’s good enough in a commercial sense to sell, so I have yet to enter a single item in the “give away/sell” column of the scorecard. I’m not worried, though, because I can make short work of that whole column when I take a carload of donations to my local Goodwill (in Pennsylvania) during its designated “Epic Spring Donation” day on March 20.

My own scorecard would be just as puzzling as any other, if it were to be read by anyone but myself. I suppose this is almost an inevitable artifact of the clutter-busting process. You could say the objective of clutter-busting is that you will be left only with the possessions that make sense for you. Your more random possessions, the ones that don’t make sense, are the ones you take away. At the end of the month, you have a March of Trash scorecard that doesn’t make much sense. If someone reads your scorecard and says it looks like your stuff is all over the map and doesn’t seem to add up to anything, then that’s a sign that you’re getting rid of the right things.