We have trash! It’s fitting that March of Trash starts off with a photo of a trash bag. It might not be pretty, but the celery, kale, coffee, coconut, and who knows what else serve as a reminder of how much trash you can find just by opening the refrigerator door and looking inside. 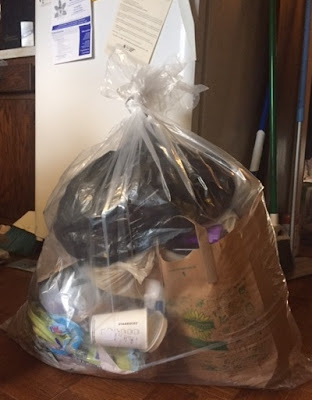 The trash shown here was the result of an hour of kitchen cleanout, but most of it, I am told, came from the refrigerator. The photo came with this note:

I cleaned out my refrigerator and kitchen. It's a great start. Makes me think of that saying: "Once begun, half done."

Several participants decided to start the month with a look at the refrigerator or freezer. Don’t know where to start? You can’t go wrong by looking here. It you haven’t gone through your freezer — the entire freezer — in six months you can be confident that you will find things that don’t belong. With a refrigerator, it takes only three weeks of neglect, or less, before you are storing things you would rather not have in the house.

Going through the freezer is not just to throw things away, but also to remember what you have so you can use it someday. A properly operating freezer might not get messy over time, but it’s still a sinking feeling to find a frosty mass in the freezer and realize you will never be able to find out what it is. Here’s a freezer story from this week:

We cleaned out clutter in our freezer, and wrote down an inventory of what's there. For example, we froze some pumpkin in 2010 and never used it. It's getting thrown out, along with some old things that aren't even labeled. For the pumpkin, we knew what it was and how old only because we took the trouble to label it when we first put it in the freezer. We saved it with good intentions, but it used up space, energy, and a plastic freezer container for 6 years.

Many of the same principles that apply to clutter in general apply in the refrigerator or freezer too. If the story about how you will eventually use it sounds far-fetched, or if you could use it today but don’t want to, then throw it away — yes, even if it still looks okay. Throwing it away won’t be easier next week or next year.

I did some refrigerator cleanup of my own yesterday. I wasn’t looking for clutter so much as trying to decide on something for lunch, but I found two bell peppers I had forgotten about. They were probably, I am embarrassed to say, a month old. That is too long to keep a pepper, and they were showing the first spots of mold. To make matters worse, I had forgotten I had them and had bought more. I put the two bad peppers directly in the compost. Then I took a quick look through the rest of the refrigerator, fortunately finding nothing else that urgently needed to be thrown away. The refrigerator is sometimes the first sign that you’re indulging in a fantasy view of time, hoping that the world slows down so you can keep up. But while you’re scrambling and hoping, the refrigerator only gets worse. Below, Weird Al Yankovic explains this point better than I ever could.