I am writing this post in the laundromat, which tells you already that I have found an exception to my month-long no-shopping, no-spending policy.

I knew before the month started that there were exceptions on the way. The biggest was the new sofa. I had selected and paid for it already, but I had to wait weeks for delivery which put the delivery date on April 6. This shopping-related process could not be complete until after the sofa was unboxed, assembled, and put in place. With that done, there was a stroke of luck: I found that the futon cover I had, which made the old sofa look better but took some effort to put in place, actually fits the new sofa. It was too dusty after five years of use to put on a new sofa. The cover is too large to wash in the washing machine at home, so here I am putting quarters into the machine at the laundromat. 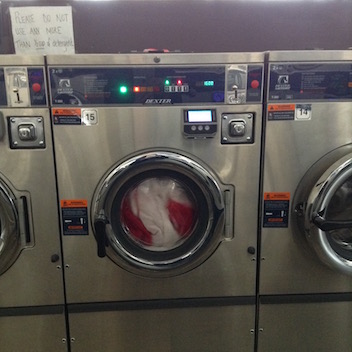 I did not want to use the spending moratorium as a reason to be inefficient, postpone essential tasks, or let things break down, and this led me to make payments almost immediately. There were four planned payments I needed to make, including two tax payments. It would have been better to pay them sooner but I did not think of them or did not know the amount to pay when I was making payments at the end of March.

I went to restaurants on two occasions in the first eight days of the month. I didn’t pay, but I don’t want to use someone-else-is-paying as a loophole. On the other hand, I don’t want to shut down my social life for the month either. I didn’t realize how essential restaurants were in my life until I was faced with this dilemma. I will try to do better, but this also goes to show how important it is to be able to cook. People who aren’t comfortable in the kitchen have to pay someone who is, probably at a restaurant, and this is a need that shows up almost every day.

It was only day four when I needed to replace something. The equipment in question was a charging cable for a mobile phone. I could have gotten by, buying just one cable as a replacement, but while I was there at the display, I bought two. One is better suited for use at home, and the other, for the car. One reason I shop so often, I realized, is that I buy less expensive products that aren’t as durable. I save money in the long run, but is it worth it if I have to spend the extra time replacing things so often? Or is it just the nature of charging cables and similar items that you have to replace them several times a year? At least now I will find out. The word on the street is that the least expensive cables aren’t half as durable as other common brands, so this time I selected cables that, I hope, will last longer.

What do I do when I can’t buy things because I’m not shopping? In the most essential cases, I write them on my shopping list for next month — but this is not a perfect solution, is it? I am still going through most of the mental process of shopping if I write something on a list with the intention of buying it in the near future. The best thing I can say about this is that I am keeping a short list.

The shopping moratorium has not been a big strain yet but it has been far from automatic. Minutes ago while I was driving to the laundromat I thought of a store I might want to stop at, since it is along the same road. It took a few seconds to remember that I wasn’t shopping this month.

These moments don’t come up all day long, and I haven’t yet walked up to the doors of a store and then said, “Oh, wait . . .” My question of what I would do with all my extra time, now that I am not shopping, seems silly one week in. I have more than enough to do. As an example, I have at least 10 more pages of tax forms to do, with deadlines just one week out. It is probably true that I never really had time to do as much shopping as I was doing.