The March of Trash kicks off today. Participants are setting out to be “everyday clutterbusters” for the month of March. With less than four days of planning and preparation there wasn’t time for a big buildup, but even so, I have heard of at least six people participating. I consider that a pretty strong expression of grass roots support, considering how few people have heard of the challenge at all. If you’re just getting started, visit the March of Trash Challenge page to get the details and download your scorecard.

I started my March of Trash by tossing some of my leftover food containers. These are the polypropylene tubs and lids that restaurant food arrived in. They are dishwasher-safe and microwave-ready, so it’s useful to have them, but I need only a few. I kept the best ones and threw the rest in recycling. 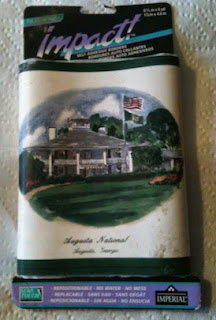 There are two pieces of clutter — not mine, but from today’s efforts — that are worth looking at. I think they represent some of the most immediate challenges you face when you look for clutter. The decorative border shown here looks like it ought to be good for something. It’s a wall decoration that would typically go along the top of a wall where it meets the ceiling, perhaps above the wallpaper on a well. But it is a piece only five yards long, effectively shortened by stains near one end, so it is not so easy to imagine what room you might decorate with it. It is “new” in the sense of never having been used, but it has been sitting around long enough to be considered old. No one knew where it had come from. It looked like something to donate to Re-Store or Goodwill, where someone might find a use for it.

On closer inspection, though, the decorative border had lost much of its adhesive power. It must be older than it appears. If you put it up on a wall, it would peel off and fall down after a few days. It ended the day not in donations, but in the trash.

The wire basket below, shown with a half-liter water bottle to give a sense of scale, offers a different challenge. It is certainly useful for holding some kind of supplies, but what specifically? It is made of steel and has to be used in a dry location so it won’t rust. The basket would be just large enough to hold CDs in jewel cases, but the owner doesn’t happen to have any CDs to store. It is too large to hold pens and pencils, too small to hold envelopes. Possibly it will end up serving as a caddy for scissors and tape. 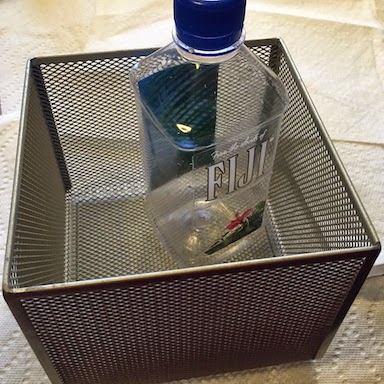 Such are the challenges of clutter. You look at things and realize they are not what you assumed them to be. Or at least, that is what you have to do if you want to reduce your possessions to a more practical level.