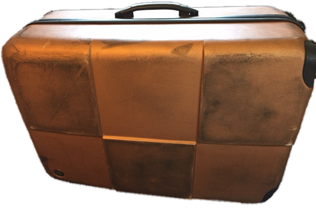 We keep many of our things with the story that we will eventually use it so much that it will be broken or worn out and then we’ll have to throw it away. It’s a disappointment when it goes to pieces on its own — not from being used but just from the passage of time as materials deteriorate.

That’s the story of this suitcase. I am used to hearing of latches or hinges that fail, and I’ve seen vinyl luggage become brittle over time, but this piece got sticky, a mode of failure I hadn’t heard before. As Paul explains:

This suitcase from the attic had to go into the trash. Its rubberized exterior, meant to be easy to grasp, had developed a tar-like stickiness over a period of years.

It’s natural to look at a problem item like this and ask how it might be fixed up. Don’t take too much time pondering a suitcase, though. I’ve never heard of an instance in which repairing a suitcase cost less than replacing it.