Clutter Spotlight #9: Clutter on the Ceiling

No, chances are, it’s a ceiling, the part of the room that is most likely to go unnoticed. 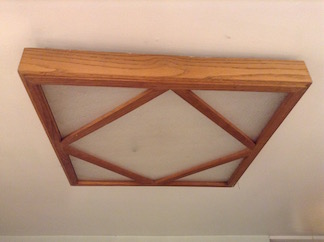 It is rare that anything forces you to pay attention to the ceiling. You’ll never stumble over it, and it doesn’t require much cleaning. Anything on the ceiling is, by design, out of the way. It is still better not to have things there that aren’t being used.

That was the case with the fluorescent light fixture hidden inside this wooden frame on my kitchen ceiling. The electronics in the fixture were old and unreliable when I originally bought the house. They never worked consistently, so I got out of the habit of turning on that light switch. Fluorescent light is an obsolete technology anyway, and the room was lit more reliably and efficiently by the other set of ceiling lights.

The whole process took only about an hour. I packed the pieces away in cardboard boxes that will protect them until I take them to a household hazardous waste collection event next month.

The wooden frame is still there and you don’t see the difference when you look at the ceiling, but I have that weight off my shoulders, metaphorically speaking. Better yet, now that the fluorescent fixture is gone, I can put in some modern, efficient lights that I would actually use. That will be another one-hour project after I acquire the appropriate lights.

I seem to be focusing on my kitchen first this month. When you’re going after clutter, it’s perfectly okay to look in the places that catch your attention or that that bother you the most. All clutter is part of the same state of things, so it doesn’t matter where you start. You don’t need to worry that you are neglecting a different part of your clutter. Clutter is neglected by nature, but whatever clutter is next will be easier to find and easier to deal with as a result of the clutter you have already taken away. The more clutter you take away, the easier it is to see the clutter that remains. That’s one reason it makes sense to start with the easiest clutter you can find on any given day.