I mentioned my miniature square plates so here they are. To put them in context I need to show the four sizes of plates I have, so the picture shows one of each. From largest to smallest, they are the dinner plate, small plate, dessert plate, and miniature square plate, along with a small apple to provide a sense of scale. 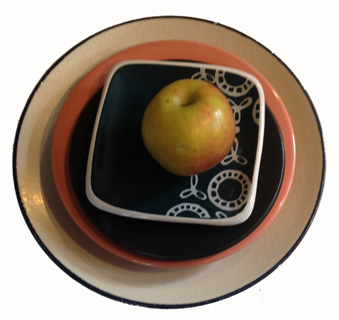 Traditionalists will see the problem immediately. On the traditional American table there is no use for four different sizes of plates. Indeed, you can get by with one size if you insist. That would be the small dinner plate, a size in between the dinner plate and the small plate. More conventionally, you would have two or three size of plates, but probably not four.

Maybe the tradition is right, because despite making an effort for at least three years, I have been hard pressed to find a use for the miniature square plate. It holds a very small dessert but does not look as good as a dessert plate in that role. Its real use would be for a small snack, perhaps grapes, olives, or cheese eaten away from the dining table. I like to imagine that my lifestyle would allow for this kind of use on a regular basis. In practice, my days unfold with such velocity that I would surely skip a snack as small as that unless it were a handheld snack such as a candy bar.

That makes the miniature square plate an aspirational possession. I would like to think I have the kind of life that contains such a thing, but being realistic, it’s not going to happen, at least not in the next couple of years. Aspirational clutter can be hard to notice because you imagine you use these things regularly. Ask yourself: When was the last time? When will the next time be? Looking at your actual recent history and current habits, you realize how infrequently things find their way off the shelf. I would guess I have used a small square plate two times in the past year, and I have five of them stacked up.

On the Value Card, the five miniature square plates rank low in every column. They are relatively unlikely to be used. The benefit when used is forgettable. They take up valuable shelf space, more than you might expect for something designed to be small. If I do need miniature plates someday there is no mystery about where I can get them.

Yes, I know, they’re cute. That and the sale price are why I bought them. But if I can’t find an occasion for actually using them, out they go.