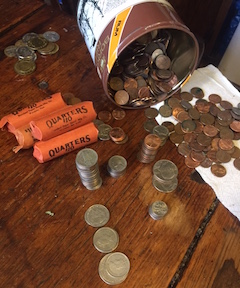 Suzanne is a change magnet. She is not only changing her surroundings by removing clutter, but she is finding change — coins, that is — in unexpected places as she goes along.

It’s funny to think of money as clutter, but that’s what it is when it is so disorganized you wouldn’t think of spending it. Organized into $10 rolls, the stray quarters turn into something you can do something with.

And some of the money is still clutter. Suzanne writes:

There’s the Sheryl Crow song, “A Change Would Do You Good.” Most of the change I found was U.S. [money] and that would do me good. (Not sure sure what to do with all the foreign coins.)

As inspiration for those who also want to find change while clutter-busting, Suzanne recommends “A Change Would Do You Good” and these other two songs about change.