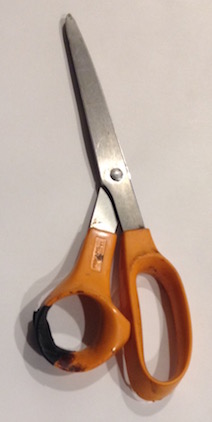 Sometimes something is just worn out. That especially describes this pair of scissors. Any way you look at them, they’re pretty old. I’ve been using them for more than twenty years. The handle broke last year and is held together with gaffer’s tape. There are stains. Most of all, though, they don’t cut the way they used to. After the last big project a couple of weeks ago, the edges are so dull it takes an extra effort to cut a plastic bag.

After so many years, it can be hard to believe that something is actually used up, but that was undeniably the case here. It was time to throw these scissors away.